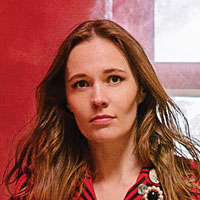 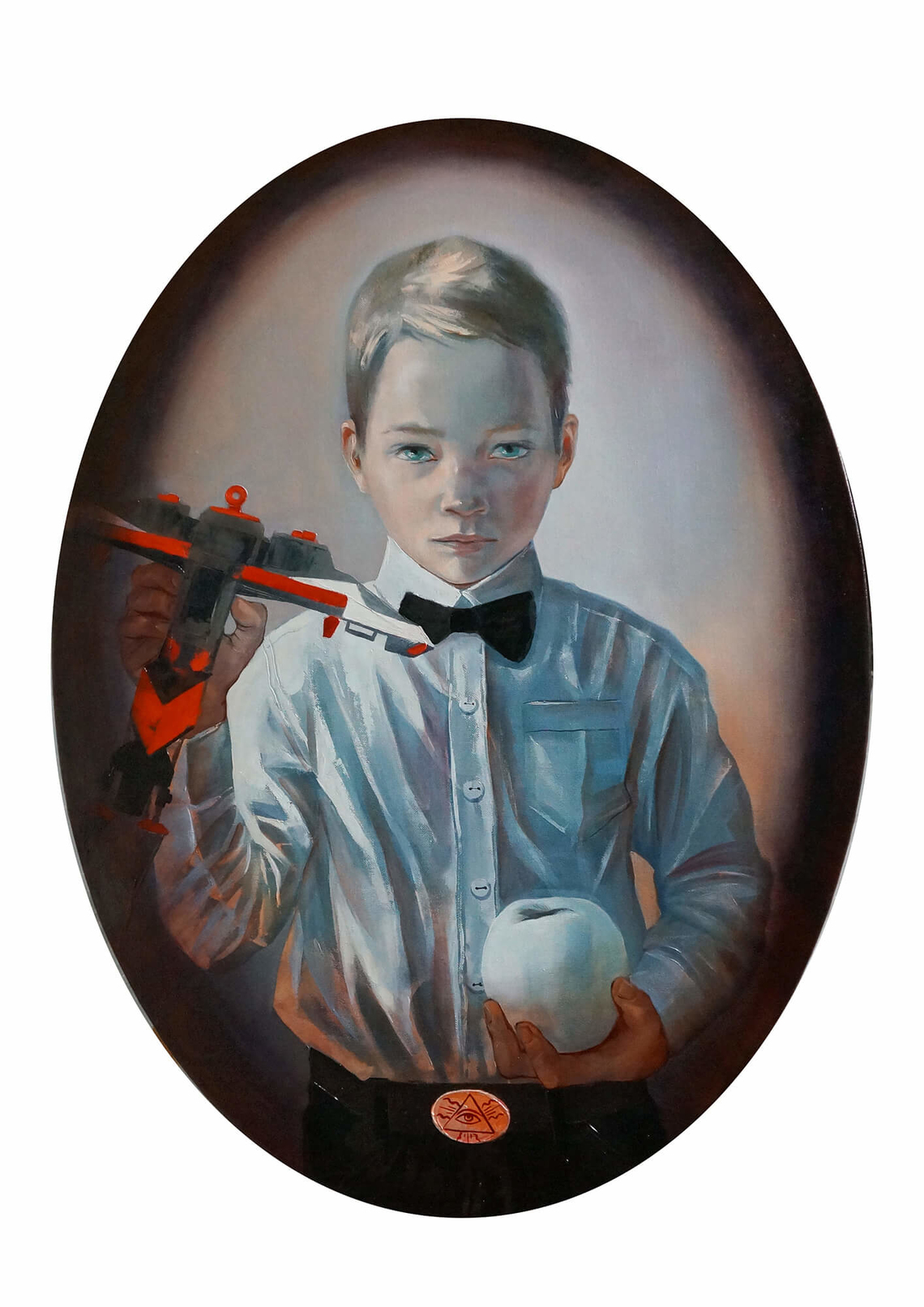 When God was young

She still does. Eternal youth courses through her new exhibition at UVG, When God Was Young.

I first met Irina on a sunny Saturday afternoon in July 2010, during the début edition of the Moscow Young Biennale. She was lolling alongside a giant matchstick installation by Ivan Plusch at Proekt Fabrika, a converted industrial art centre in the north of the city. I’d been told to look out for Irina by my British compatriot Ruth Addison, then a curator at Moscow’s Triumf Gallery.

You couldn’t miss her. She was wearing a mini-skirt and bright red stockings.

Irina was not on show at Fabrika (at least, not in an artistic sense), but at Open Gallery off Novy Arbat. Her Beauty Contest series starred a naïve, exploited young girl with superbly painted blond hair set off against a screaming scarlet background. Even among a cohort of St Petersburg artistic greats like Ilya Gaponov, Tatiana Akhmetgalieva and Ivan Plusch, you couldn’t miss her. Irina Drozd had arrived.

Irina’s painterly skill and mastery of colour have been evident ever since – in group shows from Sochi to Skopje and from Paris to Perm, and in a string of solo shows with such Freudian titles as I Do Not Want To Be Old and I Know What You Did When You Were Thirteen.

She works together with Ivan Plusch, her husband, in one of two-dozen large studios on the top floor of an industrial building on the outskirts of St Petersburg, known simply as Nepokorennye after the adjacent boulevard. A by-word for exciting art in Petersburg today, much as La Ruche and the Bateau Lavoir were in early 20th century Paris, Nepokorennye was the subject of an important group exhibition at the 2017 Moscow Biennale. Both Irina and Ivan were represented – Irina with a series of paintings featuring old ladies in outlandish masks, entitled I Don’t Want To Grow Old.

Although they teamed up for a joint show at Gridchinhall just outside Moscow in 2014, entitled Illusion is More Horrifying Than Reality, Irina and Ivan form an artistic supercouple à la Goncharova/Larionov, rather than in a collaborative Kabakovian sense. Their partnership is mutually enhancing. Ivan’s current show in Paris, for instance, eschews the high-gloss finish for which he was once famous in favour of the matt paintwork Irina has used to telling effect since her mesmerizing 2013 series Another Dimension: hazy views of St Petersburg landmarks like Kazan Cathedral and Narva Triumphal Arch shrouded in mist, ice and mysterious crystals. The atmospheric skies in some of these works are echoed in her new UVG exhibition – notably in New Star and Dream Flies Away In The Sky.

Irina and Ivan live in Petersburg on Bolshoi Sampsonievsky, just around the corner from the artists’ and musicians’ apartment block on Finlandsky Prospekt where I stayed on my first visit to the city in 2004. When I visited them in 2015, Irina had just given birth to their son Mark. Treks to Nepokorennye were temporarily out of the question but, rather than take maternity leave from her easel, she had improvised a studio in the bedroom.

Irina arrived in St Petersburg in 2003. She hails from Rhzev, a small town west of Moscow. Anyone who comes from Rhzev has to be pretty resilient: it was on the Nazi/Red Army front-line during World War II, and flattened.

Irina attended Art School in nearby Tver before heading to the banks of the Neva – not to enrol at the famous St Petersburg Academy (founded 1757), but at the Stieglitz Academy of Art & Design. She feared the Academy’s rigid emphasis on technique would strangle her creative personality, and had no wish to become just another imitative Pikasyatina. ‘Technique,’ she snorts, ‘is not art. And there will only ever be one Picasso!’

Even so, Irina was to acquire a sublime mastery of figurative technique that stands comparison with that of Natacha Ivanova, another Petersburg artist with a burgeoning international reputation. Meanwhile the monumental art Irina studied at the Stieglitz is reflected in her occasional resort to giant canvases: Waiting for the Feast, the largest work in her UVG show, is an imposing 180 x 270cm. But it was not until she moved to Germany in 2007, to study at Berlin’s Kunsthochschule Weißensee, that she ‘really understood what contemporary art is all about.’

Irina is a Wanderer in true Russian artistic tradition. She has undertaken art residencies in Paris and the northern Dutch city of Groningen and now, with Ivan and Mark, spends half the year in Hungary, living and working in a small house in Pacsa, enjoying the soothing waters of nearby Lake Heviz, and chatting to her neighbours in increasingly fluent Magyar.

Hungarian art-lovers are lucky to find Irina Drozd suddenly dropped into their midst, and Irina is lucky to make her Central European debut at UVG’s magnificent Budapest venue.

I first came across Ural Vision Gallery (as it was then known) at Art Paris in 2013, when UVG were working closely with another dynamic Petersburg female – Marina Gisich, the city’s top dealer. I visited UVG in Ekaterinburg during the 2015 Urals Biennale, and found nothing provincial about its crisp white walls or sophisticated lighting. In terms of size, it left most Moscow galleries in the shade.

I did not, at the time, realize that Alla and Victor Loschenko’s vision extended from the Urals to the Danube, or that we would shortly be seeing UVG open a glittering new space on prestigious Falk Miksa Utca.

Irina Drozd’s When God Was Young provides an inaugural show of dizzying ambition and dazzling variety, showcasing her ability as both a painter and sculptor (she also works with video and light-boxes).

The initial impression is one of gently glowing colour: milky whites set off by autumnal orange, cascading golden leaves and warm tones of enveloping blue. Some subjects are familiarly reassuring: a Dove of Peace, a Tree of Life, a fabled Unicorn beneath an ancient archway...

But the Dove is countered by a Raven, and the Unicorn confronted by a Black Dragon slithering down a staircase, as we are softly sucked into the age-old struggle between Good and Evil.

Several of the paintings are designed to form polyptych ensembles like medieval altarpieces. An angel is brandishing a satanic serpent that will, explains Irina’s picture title, be thrown in the bushes.

Not so fast. Irina’s paintings are plagued by the quirky angst of Hieronymous Bosch. A monkey and drunken frog wear conical party hats. A white horse prances over a New Planet with its hooves chopped off. A white rabbit sits impassively next to a half-empty wine-glass and Magrittian pipe. Fooled Rabbit, states Irina’s title. He is being taken for a ride.

And so are we. Through a childhood wonderland of hopes and fears, dreams and nightmares.